Much of this week has been, in equal measures, stressful and boring. The latter because I loathe doing accounts. The former because I’ve more deadlines than any human should have to cope with. If I saw that bloody Moira Stuart from the tax adverts I’d drag her home and lock her into my understairs cupboard, tax doesn’t have to be taxing my arse. Even though my mountain of receipts was finally finished off and ready for the accountant at 1am last night, I’ve still a court case to prepare for and a college dissertation to magically conjure up for the end of this month.

Then last night the gear box dropped off my car, but even that couldn’t be straightforward. When the AA man arrived and shone his torch under the car, along with the shredded metal gear box we found a baby pigeon, shivering and unable to fly. Christ. Since December my kitchen’s been home to a lost ferret (http://wp.me/pyxPm-HH), then a gorgeous young cat abandoned to the elements at Christmas, and now a pigeon! Couldn’t just leave it, of course, so Charlie and I went skidding down the road chasing it with a large cardboard box and some bird seed, and it spent the night in the front room. What do you do with a poorly pigeon?! Bit of a dilemna as the local vet wasn’t really interested, but then my memory dredged up an article I’d read in the paper about a local wildlife heroine who has a Hedgehog Hospital. And there she was, on Google, Barbara Roberts, and the word heroine is spot on.

I’d a voiceover job to do in nearby Didsbury at lunchtime and Barbara suggested popping the pigeon over before I went, saying she was happy to look after him. I really didn’t know what to expect, but never did I expect to be so bowled over by the utter commitment of this lady to the wildlife she cares for. 400 hedgehogs. Yes, that’s right, 400. Poorly ones, blind ones, baby ones, three legged ones, you name a hedgehog that needs looking after, and it’s at Barbara’s house. She does it all on her own, with no help financially, is up at 5am every day, and in the springtime can look after up to 80 babies, all of which need hand feeding every two hours. She’s amazing! Plus she takes in other animals in the area which have been badly treated, there were parrots, finches, rabbits, and even a broken billed duck. After I’d finished work, Charlie and I went back, not many kids can say they’ve been to a hedgehog hospital! 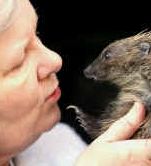 This is former nurse Barbara, with one of her beloved hedgies.

What a delightful but unexpected way to spend a Saturday afternoon. How could you not fall in love with this lot? It was impossible to stay feeling stressed after spending half an hour there, and realising just how easy my life is compared to Barbara’s!

Downside : No outdoor supper clubs
On the left - supermarket rocket after three plastic encased days, sent with my ‘trying out Hello Fresh with 60% off incentive’ delivery.
As we drove home at 9pm Mr M rolled his eyes with a smile “Now we’ve even worked on a boat” and, yep, that was a first! Yesterday we helped Tom & Ebony get their funky little houseboat “Living The Dream” ready for filming for a new @rtrptv show called Quick Little Builds presented by fellow @sirensister @gabrielle_omar. The day started well with an upside down tin of paint and a boat not yet plumbed to running water. Just my hands & blue roll then 😩😆 Massive thumbs up from me to these two, who have worked so hard on this fabulous narrow boat, you can follow their antics over at @livingthedreammcr. They went 1.2m viral with one of their Reels! We cleaned, scrubbed, painted, sealed, shopped, DIYed and Mr M wowed Tom with his free hand sawing skillz. Gosh they reminded me of me in my 20’s, starting off on a property journey, hungry to learn and full of twenty something verve. Wonderful 🥰 I’ll let y’all know when the show is on but good luck everyone with filming today 🎥🍀😚 Swipe for some pics from the start of the day - not ‘quite’ camera ready. On that note, a special mention to the indomitable @stylingalifelessordinary who roped me into this one - just a bunch of flowers I think you said 🤣