This week has been filled with the misadventures, nosiness and general all-round interference from various moggies on our sites and at home. In Project Tosca, so named due to the yowlingly operatic Oscar above, Team Moregeous have been fitting a new kitchen but we had a little hiccup early in the week. When I was in London, the boys laid the self-levelling compound to even up the floor, of course giving Oscar strict instructions not to walk in it, which he promptly ignored. But not just a tentative single paw, oh no, all four whilst the cementicious slop was still sopping wet. Being a bit of a loner and with his owner out of the house, he kept his paws hidden away for a couple of days until the compound was set nice & hard and had started to burn his pads – ouch!

A very reluctant but paw-lifting Oscar, who doesn’t like to leave the house, was stuffed spitting and arching into his basket early on Monday morning and we took him down to see Vet Angel Bernard, who’d looked after my Mia. Both his owner and I were relieved that only a couple of injections and some antibiotics were needed, we’d convinced each other that Oscar would need to be sedated and the hardened compound cut out – women! Bernard was asking me about Mia as I’d not seen him since before Christmas, I do wish she’d been able to go to him for her final visit. I told him about our newly adopted girl Missy and that brings me nicely to the second of our cat adventures. I left my top floor home office for five minutes, coming back to find that Missy had disappeared and the Velux was slightly more ajar than it had been. She’s only two so is somewhat more lively and adventurous than Mia was in her dotage, I’m constantly finding her in things, on things and up things, but this was a first when I stuck my head out of the window…

She was out there for ages, lolling on the sun-warmed lead guttering, climbing round the chimneys and slipping on the tiles. I gave up watching her after 15 minutes and just got on with my office work. Finally she popped her head over the frame asking to come back in, so I duly obliged, only to catch her red-pawed scrabbling out again ten minutes later!

Even at Project Tofu where we have fitted a new bathroom for a client, today’s schedule was feline-dictated. Sorry? asked Tofu, Did you need to fit a soap dish and toothbrush holder? Could you just wait your turn, there’s fresh water to be sipped, very very slowly, here. 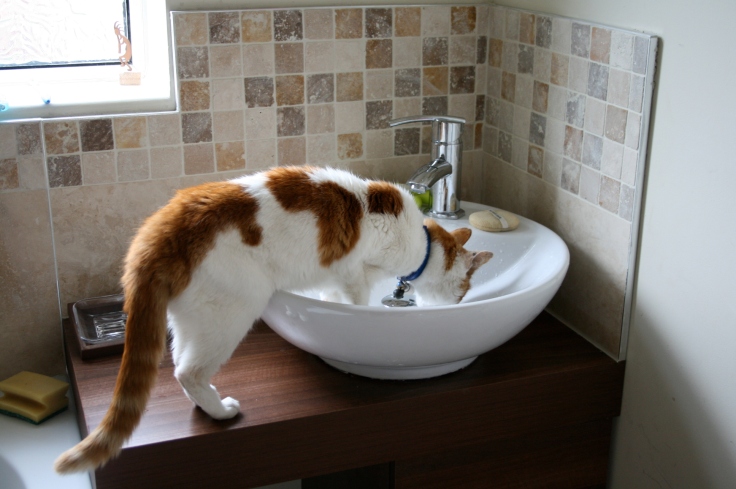 And the minute I sat down to read an email whilst I waited for some paint to dry (yes, literally), over he shot, without the slightest regard for the fact that I still had work to do. A comfy lap? That’ll be mine then, decided the property’s *real* owner. 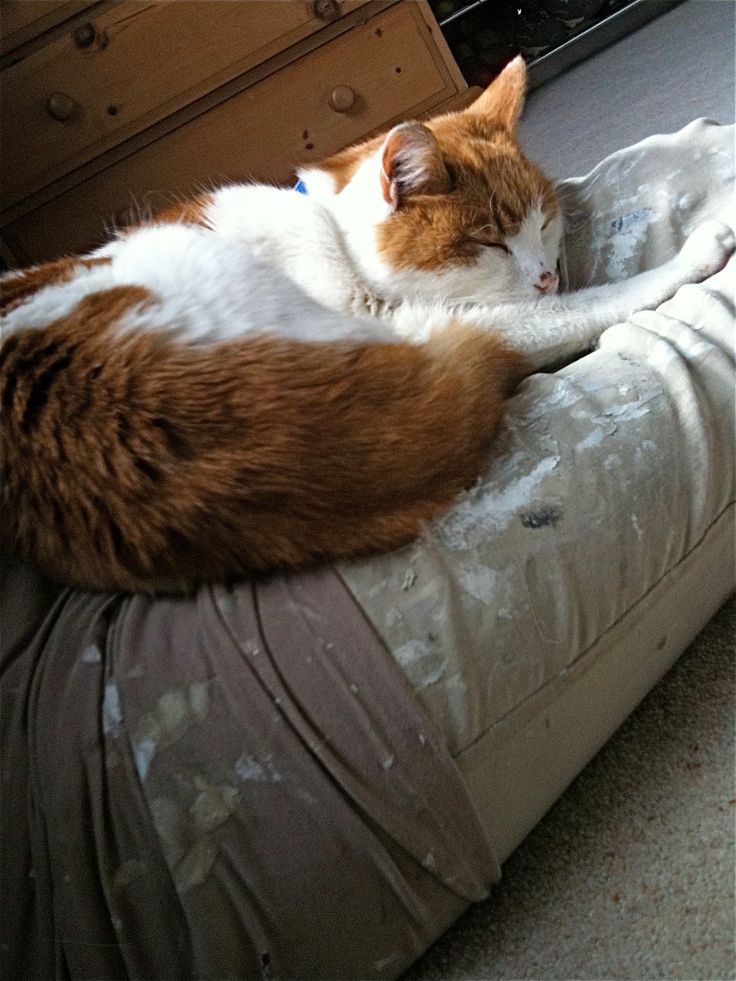 What am I going to do on the jobs where the client doesn’t have a cat? Actually, I don’t think that will happen, we just seem to attract cat-loving clients 🙂

Post tip: Self-levelling compound WILL burn your pet’s pads, so wash it all off thoroughly if they are naughty enough to walk through it and check paws thoroughly for the next few days.