It’s great being busy, but I never get a chance to blog post everything in order!  Finally, here is the cutest little Georgian cottage bathroom you ever will see, Grade II listed Rose Cottage’s sanctuary all finished and dressed as it was for the TV filming. Of course, Mrs Rose keeps her bathroom looking this immaculate at all times, as do we all. Ahem.

First was the concept and initial ideas. This is what I wrote in a blog post December 09, along with an image of a bathroom which inspired me:

“Georgian cottages like Rose Cottage 200 years ago weren’t noted for their extravagant bathrooms, so anything we do is really a translation of typical Georgian style, colours and detailing into a house which would never have originally had such a room. Cheating, actually. However if I gave Hannah a potty in the garden and a kettle, there’s a fairly solid chance I may end up with the potty on my head.

We didn’t have the luxury of high ceilings, the space for a roll top bath or original panelling, and we didn’t end up with lace at the window, but on the whole I think we pretty much nailed it.

Here’s what happened along the way. First of all the bathroom suite was stripped out and the plaster taken (dropped) off the external and internal walls. Things were a little unsafe on the first floor so some acrows were called for – that’s the adjustable vertical green metal bar you can see holding up the ceiling. Taking off the plaster revealed a very rotten piece of timber embedded in the wall (bottom left) which had to come out…..

The Law of Sod dictated that when this was done the brickwork above it collapsed. Deep joy. As you can see the wall to the left which is the dividing wall between the bathroom and the second bedroom is plywood and not plasterboard – and entirely intentional. The front elevation (the one with the window in it) was so weak that the structural engineer specified that it was tied it back onto these 18mm plywood walls to give some extra strength to the property.

Kingspan for insulation was inserted to the ceiling area and plastering commenced to the very weak inner leaf of the external wall…..

The old upvc window was removed and the new Georgian style timber window installed, insulated plasterboard for warmth bonded to the front elevation and pink fireboard to the internal walls. Extraction for the fan was sorted and measurements for sanitary wear checked….

The slightly shorted than usual (1600 as opposed to the standard 1700) Bette steel bath was popped in, the pipes for the radiator hung ready and the upper walls were skimmed. I’d some tiles left over from the kitchen area where rustic copper slate had been mixed with grey for a cottage look, so used the grey only to give a slightly less ‘country’ look. 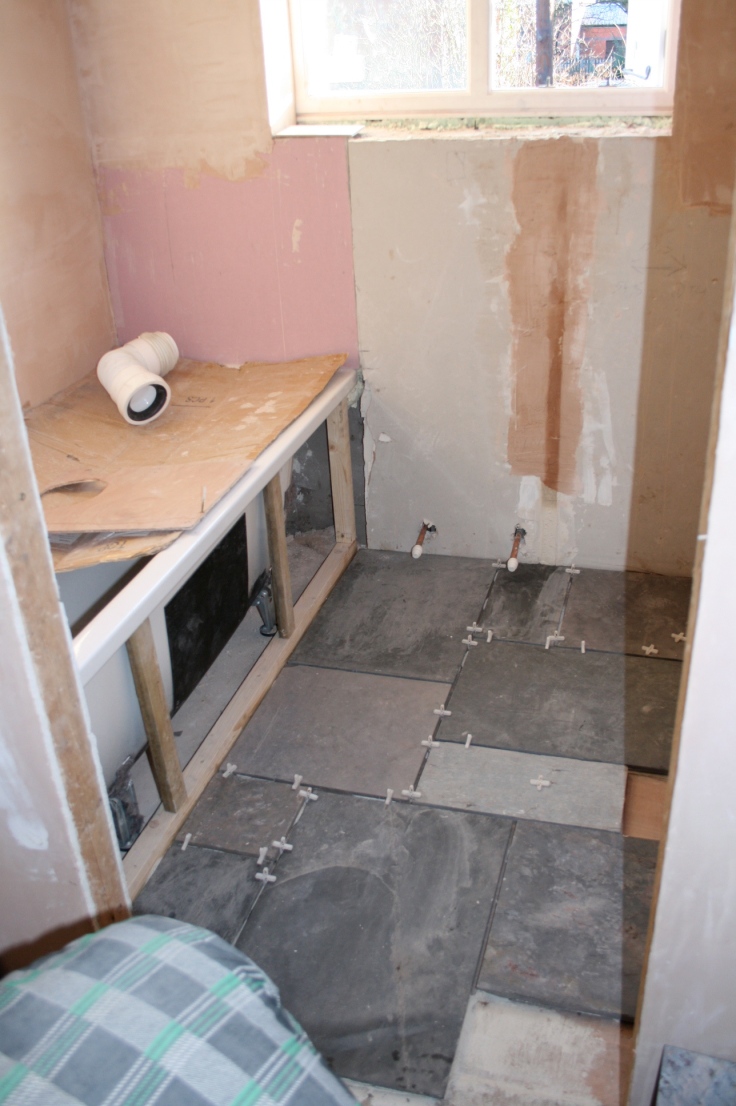 The timber panelling was fixed to battens on the walls, very Swedish sauna looking eh? And a complete buggar as every knot had to be treated with knotting solution to stop the resin leaking through the paint! You can just about see below the shelf we built above the sink area for towels etc and in which to fit the lights, bit of a stroke of genius that *puffs up with storage pride*

The cream Metro tiles were the cleanest thing in the house for a while!

IP rated downlights went in, the walls were painted Dulux Gardenia, the panelling Eau De Nil. The cutely named Monkey Tail window furniture was fitted and the loo went in.

Our fabulous suppliers were:

Bette – for our dinky but deep steel bath

Dulux Trade for the Gardenia paint, Craig & Rose for the Eau de Nil

Fallowfield Timber – for the panelling