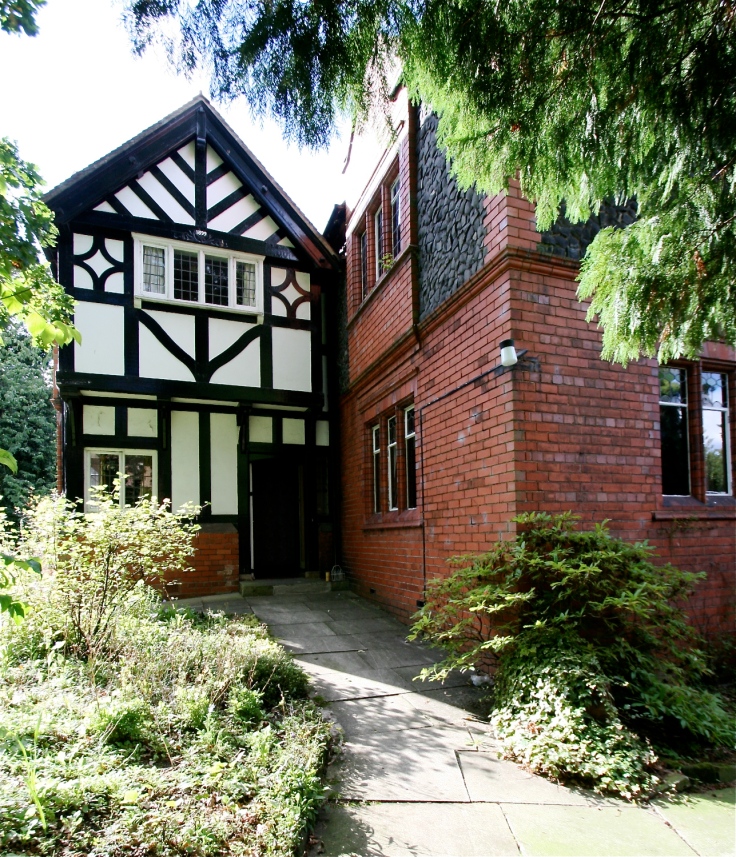 Been a lax on the old property updates recently, far too busy eating cake and dealing with stressful solicitor type situations, but in the background work has been moving on a pace and we’re involved with some fantastic projects. I’m managing a renovation contract on a very large Parsonage, which has been untouched for about fifty years. Interior design and kitchen company Ferrious Ltd are specifying all the finishes and a super sleek Italian kitchen and I’m bossing my boys about to get it into shape, and with a three storey, six bedroomed house like this, that’s a LOT of work. New central heating,  a full re-wire, full replastering, three new bathrooms, insulation, roof work, tiling, the list goes on. It’s a beautiful house set in extensive grounds, the sort of house you fall a little bit in love with, although the single glazed windows mean you’re more in love with it in summer than winter 😉 Here’s the garden view of the house, magnificent isn’t it? 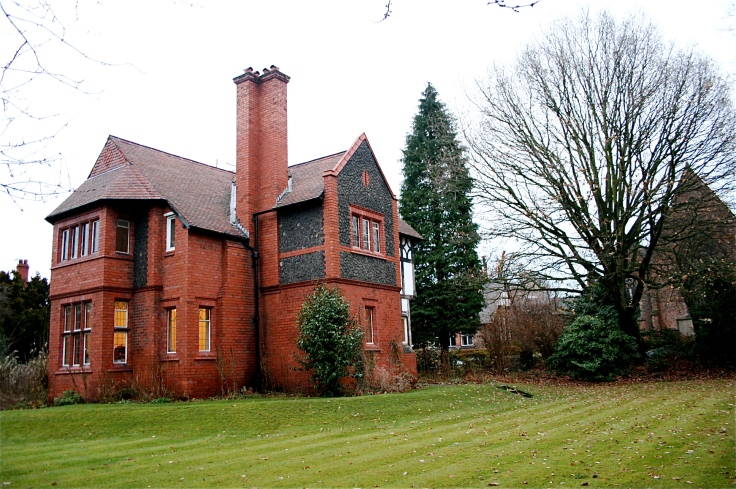 Below are my ‘before’ shots and as you can see there’s a huge amount of work required to bring it into this millenium. My role is to liaise between client, designers and builders and make sure everything goes swimmingly, on time, on budget and without any hiccups, arguments or traumas. A small ask then 😉

The entrance hallway is huge. All the paper has been stripped and the newel posts are to be stripped and sanded, with new carpets and extra wall lights added. The little room under the stairs is to be a downstairs cloakroom. 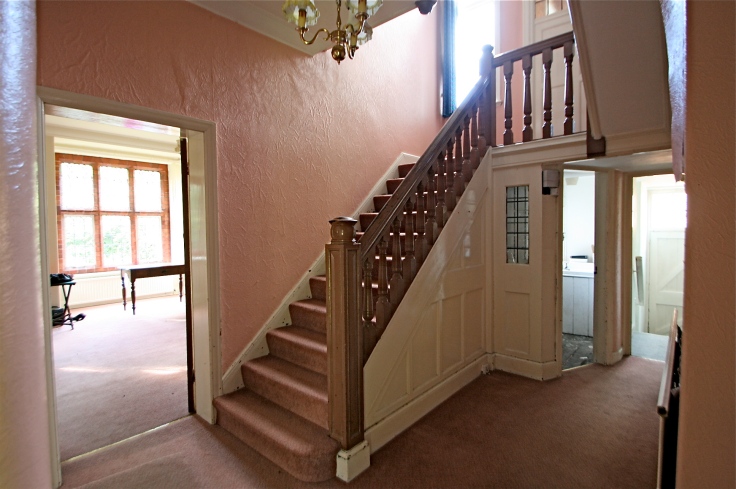 The main living room below looks out onto the garden with two bays and had a yucky 50’s fireplace which is now no more and is to be replaced by something a little more in keeping with the property. New radiators in here, more sockets, new lighting, carpets and redecorating. Huge cracks across the ceiling have also had to be repaired and the ceiling re-skimmed.

The study was jam packed with shelving which the designers had spec’d to be removed and when we did there was no plaster on the walls, no wonder it was freezing cold! New rad in here, complete plastering and skimming, keeping the existing period fireplace, losing the green curtains and pink lightshade!

The dining room could be spectacular and leads into the kitchen. Two big windows, a chimney breast and a recessed area give it character and the size of the room lends itself to being an amazing entertaining space. The chocolate paint, purple curtains, low hanging light and straw matting floor didn’t do much for the decor, let’s be honest, so new lighting, an opened up fireplace, repainting, then stripping & varnishing the floor will give it a whole new look.

Eek, the kitchen! Look at the size of the room and all the units are stuffed into the far corner, methinks a stunning Ferrious kitchen will definitely glamorize this room and give it the wow factor. It’s all to be stripped to brick and replastered, the uneven terracotta floor is to come up, the chimney breast opened ready for the oven unit, the ceiling dropped and replastered with halogen spots fitted. The kitchen will be positioned in this larger area and the rear section will house a small table for breakfast style eating. I think I’d have run underfloor heating under the new tiles but the budget dictates under plinth heating instead, you can’t have everything! 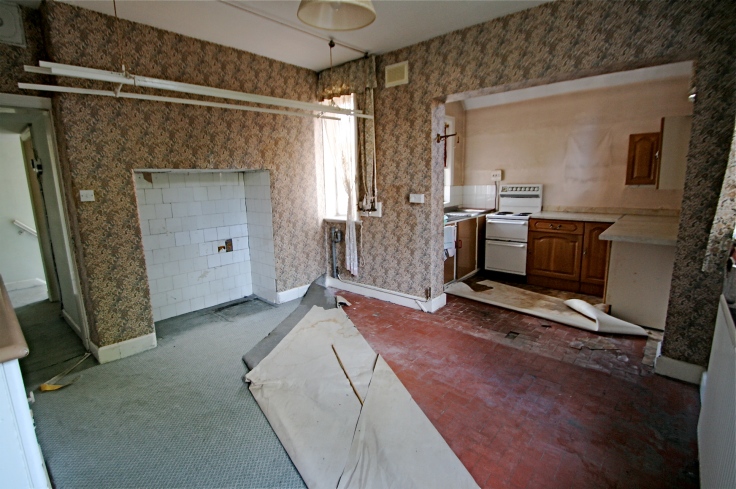 How lovely to have spacious landings, eh, it feels very grand when houses have the luxury of space like these. The Parsonage has four separate landing areas, it makes it sound like an airport! All to be stripped / repainted and re-carpeted, to lose that, how can I describe it… that muddy feeling. 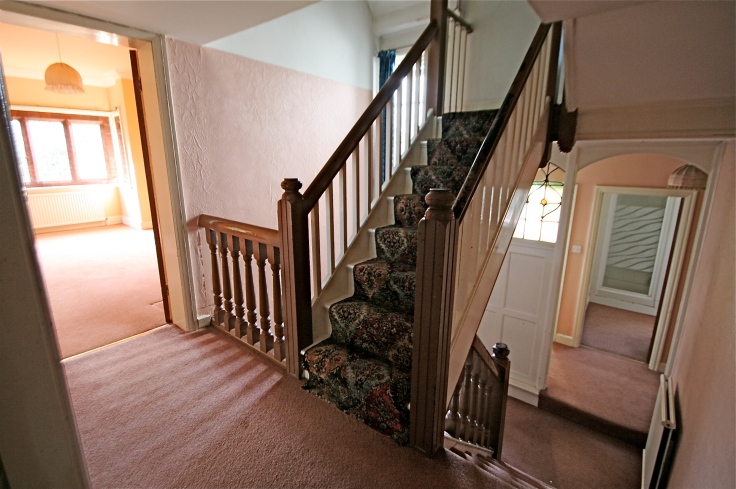 And so to the four main bedrooms; the master, the blue room, the peach room and the swan room, all named for reasons which become glaringly obvious when you look at the images. All have had their ceilings dropped and re-boarded as they are so large and have cracked and shrunk over the years. Poor Voytec ended up in A&E after being attacked by wasps from a huge nest above the master bedroom when the ceiling was pulled down, so glad I wasn’t on site that day. All to have new radiators, more sockets, new lighting and be neutralised in terms of the decor as the house is to be let when complete. That’s a bit of a shame in the swan room, I liked it’s quirkiness, but not so much in the peach room which made everyone feel a bit queasy, I just kept hearing Joanna Lumley’s voice as James’s evil auntie. 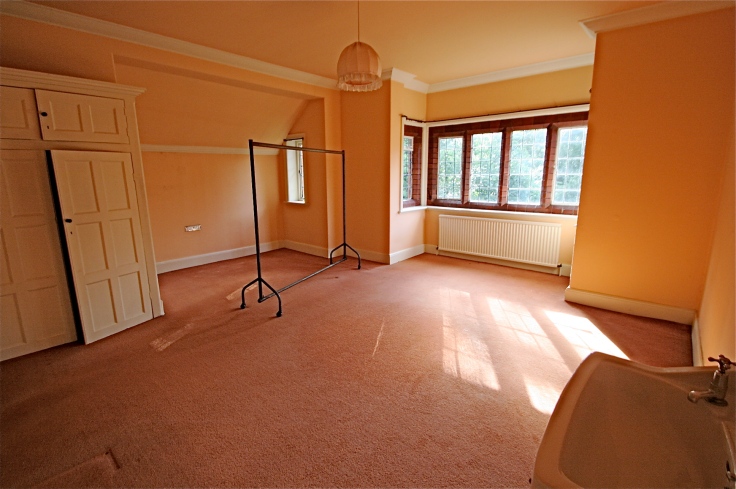 The solitary bathroom (below) for this huge house is to be transformed into a luxury family bathroom, and an en-suite added off the master bedroom, with cloakroom on the ground floor. In the room below the walls to the right of the image with the radiator on have been removed and that’s where the new bath will be, the basin moved over to the left and a separate shower cubicle is being installed to the bottom left area of the image. The loo is in a separate room just next door.

And finally, phewf, the top floor, and two MORE rooms, it’s never ending! Another bedroom which was a bit creepy, the sort of room you’d see in a horror movie we all thought and also a small box room. Both in the creepy room and the swan room, the walls around the chimney breast were sodden, indicating problems with the stack outside. Rotten joists, damaged plaster, a knackered window, scaffolding needed to get to the very high chimney outside, the Parsonage was definitely going to be a few months work, bigger than your average job, BooBoo. 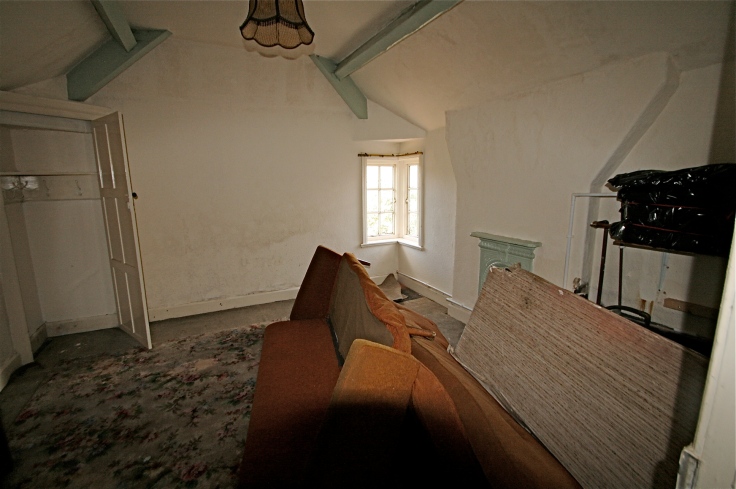