Just like Mr Miyagi’s repeated wax on wax off, it’s been window on window off here on the four dormers to allow all the Color Coat Urban panels to be folded into the openings. It’s felt like going backwards to go forwards taking out the glass openers and frames, but as well as the fitters being busy pre-Christmas, it was partly our fault for not making a decision on what we were going to use for cladding sooner. My excuse is that there was too much to choose from however now it’s on, I’m kicking myself for not taking the plunge sooner as I absolutely love it!

The anthracite powder coated steel works really well with the reclaimed slates on the roof and the Farrow & Ball Railings eggshell I’ve used to paint the fascias and soffits. Choosing the 305mm rather than the 514mm vertical panels works too, giving a more linear look. There was somewhat of a hiccup when the first window went back and it was realised the horizontal header had been set too low meaning the windows wouldn’t open – stress! – but the panels are sturdy enough to be removed and adjusted, unlike, I am told, zinc where any mistakes mean waste and cost.

I hadn’t realised that the company did colour matched fascias, soffits and guttering, something to consider if you like this product for your project. It would have saved me a LOT of painting but this is something which needs specifying early on. And be warned, one issue with cladding dormers is that already the slates on the main pitch can get broken as the panels, fascists and gutters are being fixed so be prepared for some rectification work afterwards, especially if you have heavy footed workmen!

Elsewhere I’ve been busy filling gaps between old and new, sanding back old paint and priming flaking but sound timber ready for a touch of deep grey. The image below is where the new box gutter meets the fancy fascia of the original part of Moregeous Mansions. You can just see the very elaborate and quite beautiful front elevation fascia which is going to take a huge amount of restoration work. I’m trying not to think about that too much at the moment, it’s all a bit overwhelming. One step at a time….

The soffits of the garage all needed filling and painting, plus the roof had spread slightly meaning a whole new gap between the edge of the soffit and the brickwork – another gap which needed to be filled to stop nesting birds flying into the garage and settling in.

Rather marvellously on a site with no heating, this last few days have felt like Spring is on it’s way 🙂 In preparation for the bifolding doors arriving next week, we’ve needed to clear away the small brick herb garden running along the side elevation. My jasmine tree is now too close to the new front of the West Wing, which has jumped forward a metre or so, and the new bifolds will open onto her, which is no good at all! So, after as moving and replanting my sage, tarragon and oregano, I carefully dug her up, thoroughly fed and watered her (thanks Bud Garden Centre for selling organic growth caviar!!) and then repositioned her with alliums and foxgloves at the base. Once this scaffold is down this week, the small bay window you can see will be removed and replaced with a new one and I’ll sand the cute little roof down and repaint it. Along this wall will be seating on a terrace, with white jasmine above, sweetly scented in late summer – gorgeous! 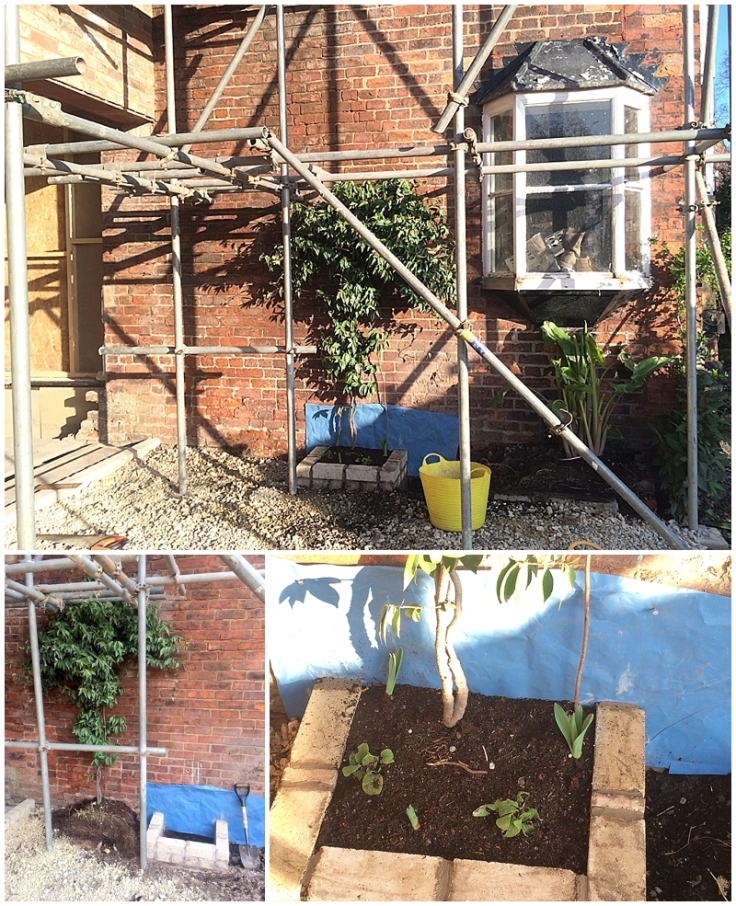