Result!! I nearly leapt off the sofa last night during the latest S7 Walking Dead and not because Negan was up to his usual toe curling tricks. Although, granted, the scene with the Doc was enough to make me want to leave the room, did you see it?!

Nope, with one eye on the TV and one eye on Ebay, I was mooching around looking for renovation bargains when I came across my buy of the month. We’ve already laid several tonnes of reclaimed 100 x 100 cubed setts to the main house pathway and I adore them, though they’re not quite finished as we haven’t laid the jointing compound. (Or aggregate, I can’t decide, any advice out there from you lot?) 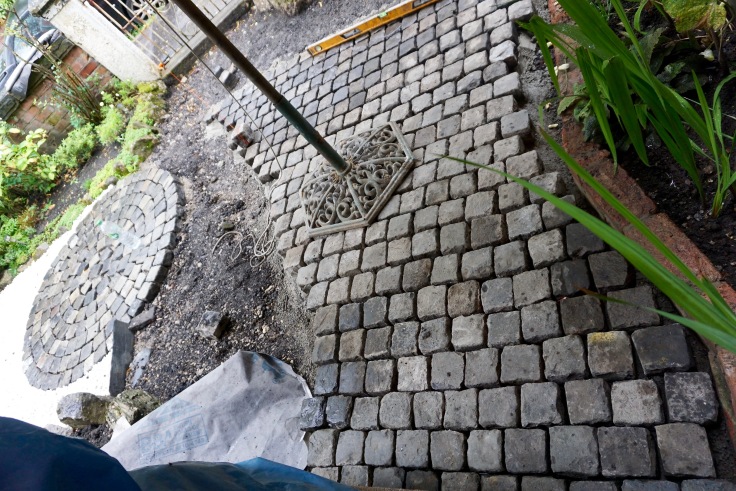 8 bags later, there’s still another area to do and that’s the main driveway up to the new garage which you can see in the picture below. Well, you can’t actually see the driveway as it’s currently under six bags of saved-from-the-build timber, but you get the gist that it’ll be a really pretty space running alongside the Bee Wall, where we’ll eventually have DIY courses and outside events in the summer. As a typical designer, I don’t want to use yet more square setts ’cause I feel like we’ve ‘done’ that, but I also don’t want to go super contemporary either.

We’re having a raft of porcelain timber plank tiling on the bifold terrace and as they’ll already add a modern vibe to my quite traditional garden, I wanted something a little more heritage, but at a good price. This has been a long ol’ reno and we’re rapidly running short of funds. Again!

This was the sort of thing I had in mind, but with rectangular setts not square.

I can’t believe I stumbled across some last night, in an appropriately Zombie-like half-asleep way. 3 packs of tumbled grey cobbles, newly made in concrete as opposed to reclaimed (hence way easier and faster to lay) but made to look a bit battered, and best of all on a discounted Ebay site. Each pack contains nearly 9msq and guess how much per pack? £90! Total bargain!!

I dealt with Dana today, who has been running the Ebay side for a company called Marshalls for 10yrs. They sell their own end of line products but also some other top company’s stock so you can trust they are good products at great prices. Super efficient, job done. I can’t wait to take delivery in the first week of March & get ’em down – they’re the ones in the middle below. Nice huh?

I quite fancy mixing up the stone with some greenery, which will make weed haters shudder but moss lovers weep with joy.

Watch this space for my February buy of the month arriving and being fitted, although this is likely to be in the summertime.

Here’s the link if you’re after some bargain block paving and the great thing is they deliver too! http://stores.ebay.co.uk/Marshalls-Factory-Shop. That’s my top tip to round the month off with.