Once upon a time, not very long ago (four months to be exact), I am ASHAMED to say one of my tenants slept in a room like this. It looks like a half-way house doesn’t it?! I don’t hang my head too far down because this horrific decor wasn’t my choice but rather adopted from the previous landlord from whom I bought the block, and one by one I’m working my way through them as the tenants move out. We’re on the home straight now as Project Squeeze was the 5th of the 6 and the final one, Project Payne, is now underway, then the halls can be done – it never stops!

The room above is actually now the kitchen, so I can’t do ‘strict’ before and afters as the bed isn’t in the same place. You’ll see this image again in the kitchen shots, but I posted it to give you an idea of the sleeping area pre-works. Mr M joked that if we brought the tenant back blindfolded and stood her in Squeeze, she wouldn’t know where she was even though she lived there for three years. I think he’s probably right 🙂 The new bedroom has been created from the space where the shower room was, for plan geeks I’ll post a layout soon to give you an idea of what can be done with an attic space / loft conversion.

This is how I’d imagined it to look a few months ago, my own mini-mock up ( I really need to learn how to use CAD!):

And this is how it actually looks, not TOO far off, I don’t think huh? Couldn’t fit the Ikea headboard in as it’s quite deep with shelving and decided against white floors but it’s close! 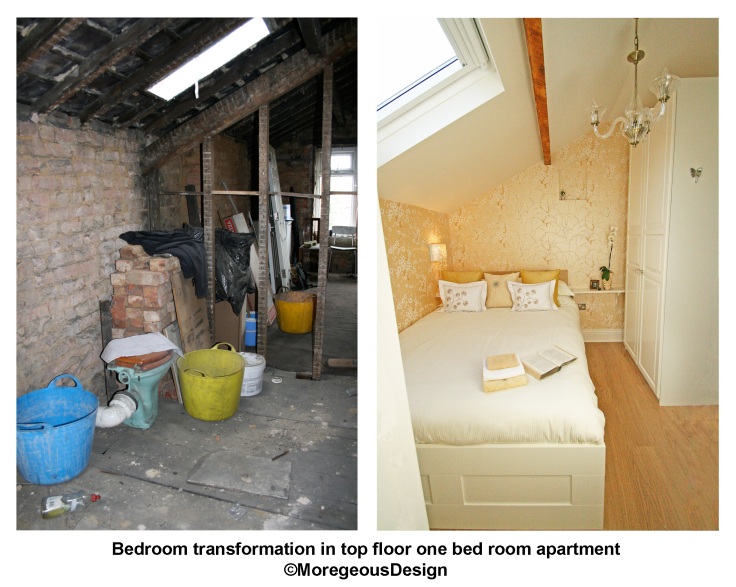