It’s been a long old week and I’ve been a bit lax on the blogging front but listen, if I haven’t got time to shower, I haven’t got time to type – eeeeewww stinky! Thank heavens some pals went on holiday today and were kind enough to leave us their house keys – tonight it’s bath time 🙂 Lots of lovely friends have offered but at the end of each day when you’re tired, filthy and a little bit grumpy, the last thing you want to do is impose on anyone else. An empty house however is a different story.

This week a lot has happened! A big delivery of blockwork, bricks, sand and cement arrived bang on time from our local Buildbase so the brickies could start getting up to damp level. In order so far we’ve firstly demolished, then dug drainage and trenches for the foundations, filled those with concrete and now it’s time to build the new brickwork off those foundations. The grey blocks and dense red engineered bricks get used first as they are underground so need to be hardy and solid, unlike the *softer* reclaimed bricks on show above ground. And here below is proof that even builders sand can be gorgeous…

Of course there have been the obligatory in depth manly conversations…. 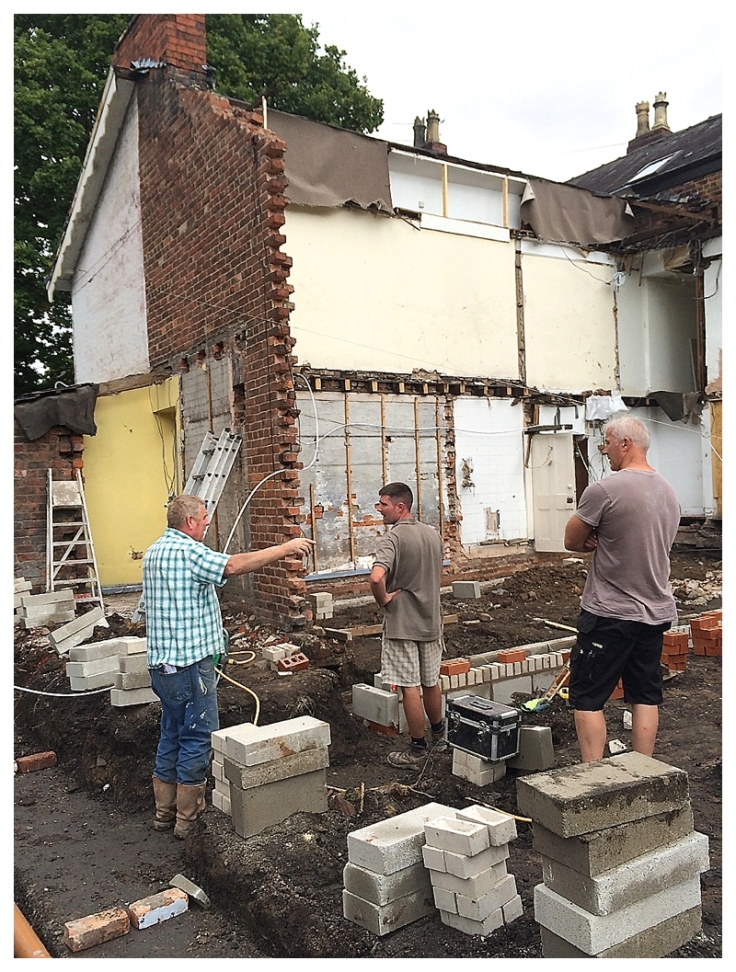 Whilst Tony has kept the site lively by singing louder than the cement mixer & digger combined, a talent worthy of an audience with Mr Cowell. Seriously, this man has lungs and knows every word to every song going. Apparently on other sites he’s been told to keep it down, the miserable gits! I need to Vine him, leave it with me.

Working out levels for the new pre-cast concrete floor beams was a bit tricky before the brickwork went in this week but seems so much easier now it’s in place. We’ve needed to dig an extra trench to secure and shore up the back wall of the kitchen and to support the new floor beams as the party wall wasn’t exactly solid, see below. Have you ever seen a brick course this wavy? Not one that’s meant to be straight anyway!! The wall’s 150yrs old next year so I think we’ll make an allowance for her to have a touch of droppage as we all do with old age, but more support was definitely needed. With humans, a good bra, with walls, 3 cubic metres of concrete.

It’s been so exciting so see new walls being put in place and even though there is SO much work to do, it feels like massive progress.

However the highlight of the week was most certainly the Wonut arrival, a personal delivery to site from the Splendid Sausage who must have felt sorry for us toiling away in the mud. The lads swooped down like vultures, same time next week Mike? 😉

Luckily I’m not needed much from now on as #BuilderCat has a handle on this brickie management malarkey, she’s in charge from the best vantage position on site…