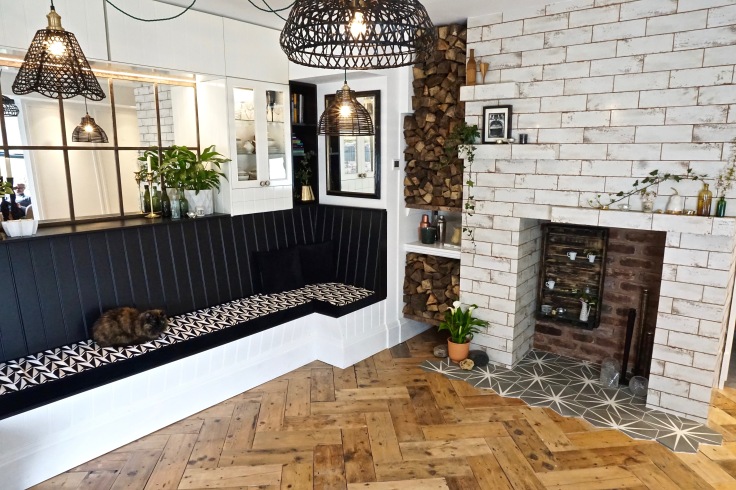 You know me, I’m all for a good trend but for anything ‘on trend’ to work, it has to fit with the person and the house, rather than simply be inserted as a one size fits all solution. When we started our renovation 44yrs ago, or was it 45, I forget, I decided our interior design style was going to be a sort of luxe-indust hybrid. Part of the house was built in the 1850’s (though that particular falling down section had to be demolished for the new extension), part in late Victorian times and part in the early Edwardian era, so it’s something of a hybrid itself. Throw in a sense of the Manchester industrial and a properly gothic porch, and you’ve a house which could pretty much take any style of classic or quirky interior design and be fine with it. It’s also always had a black and white exterior, which suits my interiors style down to the ground

Add into the mix the property’s unusual semi-cross layout, meaning we’re wrapped on all sides by garden and greenery which is viewable from every window. For me this dictates that an organic design internally is obligatory. Not just cottoning on to the greenery trend, but living and breathing it, because that’s what the house demands.

So. We’ve got greenery, monochrome, a touch of the industrial, original features and a sense of the organic, all thrown into the mix with a dash of 2018. Sounds like the recipe for my perfect dining room. Not everyone’s perfect dining room maybe, but the one which is perfect for us 🙂

Personalising all these elements is really important to me, perhaps it’s one of the reasons why the renovation is taking us such a long time. No, not perhaps, who am I kidding, it is the reason. Let me show you a few ways we’ve done it…

Apart from the fact that he calls me Steptoe because I erupt in hives whenever asked to throw anything away, the beautiful original yellow pine of our pre-renovation floors cried out to be re-used. We’d carefully lifted it from various rooms so we could install the underfloor heating, but some inevitably splintered and spilt. As the newly laid UFH created a ‘solid’ floor, I had the idea of cutting the lengths to smaller sizes and creating a giant parquet effect with the original boards. I had the idea. And then he did the work. That’s how things often work around here 😉

The result is bespoke and warm, both literally from the pipework below and visually from the different shadings as we randomised the board laying when glueing them down. Some are darker in colour than others, some super smooth and some very textured where I’ve flipped them to get the ‘rough’ underside.  Pine is a material suited to period homes and it’s rare to find pine parquet because most is either hardwood or oak engineered. Herringbone is also very of the moment right now, but it’s absolutely a classic period home look, so this choice sits well for me both now and into the future.

Of course, we could have bought a table and six chairs but that’s just too darned straightforward isn’t it? Nope, I decided I’d quite like a great chunk of banquette seating, one where the cushions could be removed and there’s a dancing stage right there 😉 Please ignore the dodgy seam right in the middle of the amazing geometric fabric, which is being re-done to be patterned matched, and focus instead on Mr M’s fabulous angled seating and clever reeded panelling. Thanks to all of you who helped me decide to paint the upper section black, after I’d already painted it white. It was a pain in the rear, but yes, it was the right choice.

There’s a bit of a surprise to this seating, which I’m going to show you in a week or so, in case any of you fancy your own built in seats. Betcha can’t wait huh?

We personalised the over table lighting using separately bought shades and individual lighting components and cable. Doing this ensures that quite literally no-one has the same lights as you, a big win in the world of high street buys and Insta-favourites. There’s nothing wrong with buying off the shelf, don’t get me wrong, but mixing it up a bit and going bespoke for some of your lighting at home adds a unique luxury which it’s impossible for anyone else to replicate. Be inspired by, yes. Copy, no. See a blog post on How To HERE.

When we started on this reno, little did I realise how many hours of my life I’d spend on this fireplace. Cleaning, re-pointing and scrubbing the red internal bricks; levelling, mitreing and climbing ladders to tile the front face of the whole chimney breast and then  painstakingly pattern laying, sealing and tiling the hearth with encaustics….. honest to goodness, it was a project in itself.

I chose these encaustic hearth tiles because I like them, they make my heart sing with their starburst explosion of style. Obviously they’re damned cool, but also there are a number of different rotational ways they can be laid. This means that even when someone else has them in their fireplace, or bathroom, or kitchen, chances are they’re in a different pattern. Cutting them into the giant parquet was another step down the road of personalising the look and making it mine. Making it Moregeous 😉

Individualising tiles choices is so easy these days, yet making the decisions can be so hard as there’s so much choice. Too much choice? Maybe.

I’ve always loved white metro tiles and even though they are so incredibly popular, I still adore them. But I wanted something different. So, to sit true to my design style and yet to make a personalised statement, I chose these stunning Diesel subways. 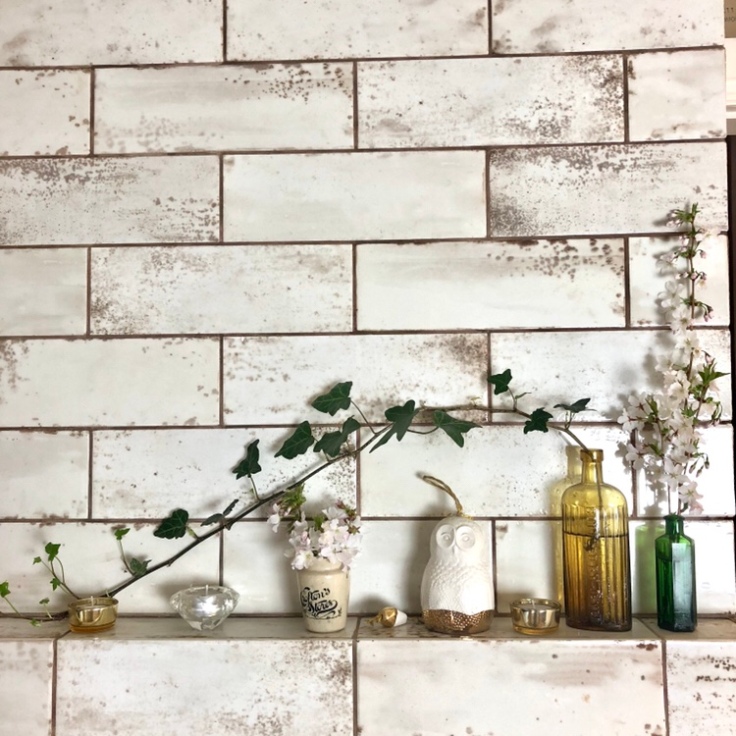 They’re textured and slightly industrial, warmer in tone than plain white so less reminiscent of a trendy coffee-shop and just reminded me so much of those beautiful ceramic brick walled butcher or fishmongers you used to see. The subway style allowed me to make floating shelves which from a distance makes it looks like the items on the shelves are hovering in mid air, especially at night. There’d have been slightly more marital bliss had I not wanted to add in another shelf after the whole thing was finished and grouted, but it’s a woman prerogative to change her mind right? Or so I keep telling him. I kept telling him it as he smashed out six perfectly fitted tiles to insert the shelf above. 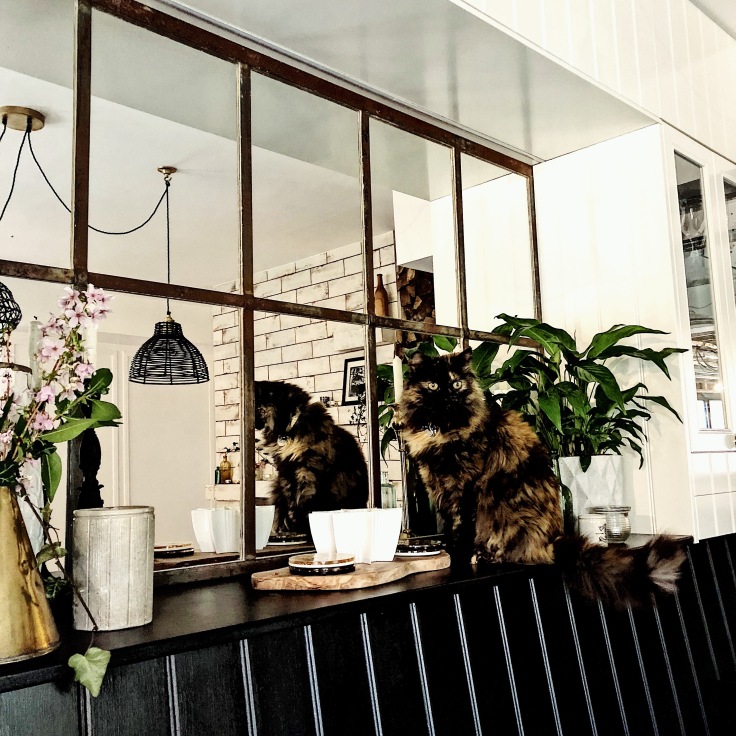 Take it from a salvage show huntin’ and charity shop scourin’ expert, there’s nothing quite like finding wonderful treasure and knowing that no-one else has it. Like, no-one. Only you. Just you. You get the picture. There’s a feeling of history and soul in a piece which has been well used and loved, whether it’s an old sideboard lovingly repolished, a re-painted chest of drawers, or an old window re-purposed into a mirror. Builder Cat  is rather fond of this find too. She can gaze at her beauteous reflection for hours, disturbed only by the snores of the fat ginger Rockster on the seating below. One day I fear she might do that cat paw tap thing and knock the chopping board down onto his head. Though he’s so tough, I don’t think he’d notice.

There are lots and lots of ways you can tap into trends without being a slave to them, and without compromising your own sense of style. The trick is to know that own sense of style and bend the trend to suit you, not the other way around x