Feels like massive progress as we see the MOT stone going down on top of the reduced depth earth oversite within the garage walls. I always find the building process endlessly fascinating and being part of it all unfolding at Moregeous HQ is ace! Missy Builder Cat clearly feels the same way, clamped to my legs all day. 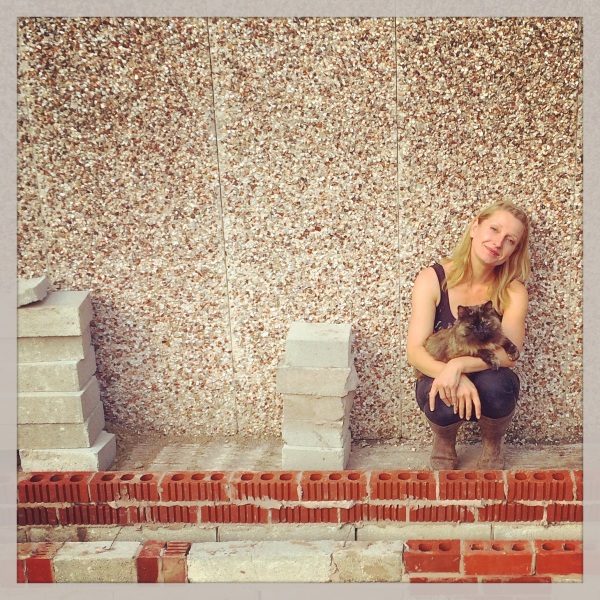 The dense red engineered brickwork is currently up to damp level, ie the level where the brickies roll out a thin black damp proof membrane to stop any moisture rising up the walls and into the house / garage, before carrying on building up the walls.

Great piles of stone are then being barrowed in to go over the earth and the site looks a million times neater already following the summer mud bath.

We’ve saved hundreds of the original bricks from the demolition. I’ve cleaned about 1400 of their old mortar and now they’re ready to be used again for the *new* extension. Added to this another 2000 reclaimed bricks sourced locally and another 600 from our decrepit garden wall and that should hopefully be enough! Using the original bricks is massively important to me as we strive for a new building which looks as though it might always have been here and also want to reduce our carbon footprint by using less bought in material.

This is also a very good document on using reclaimed bricks with lots of technical info and a few words of caution: HERE

One thought on “DoUpDiary #19 : How to specify Reclaimed Bricks”